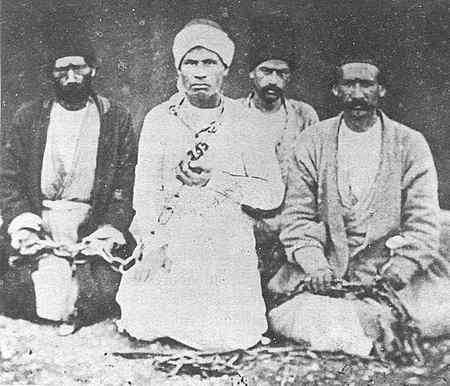 He is God, exalted is He.

We ask God to send one of His servants, and to detach him from the Contingent Being, and to adorn his heart with the decoration of strength and composure, that he may help his Lord amidst the concourse of creatures, and, when he becometh aware of what hath been revealed for His Majesty the King, that he may arise and take the Letter, by the permission of his Lord, the Mighty, the Bounteous, and go with speed to the abode of the King. And when he shall arrive at the place of his throne, let him alight in the inn, and let him hold converse with none till he goeth forth one day and standeth where he [i.e. the King] shall pass by. And when the Royal harbingers shall appear, let him raise up the Letter with the utmost humility and courtesy, and say, ‘It hath been sent on the part of the Prisoner.’ And it is incumbent upon him to be in such a mood that, should the King decree his death, he shall not be troubled within himself, and shall hasten to the place of sacrifice saying, ‘O Lord, praise be to Thee because that Thou hast made me a helper to Thy religion, and hast decreed unto me martyrdom in Thy way! By Thy Glory, I would not exchange this cup for [all] the cups in the worlds, for Thou hast not ordained any equivalent to this, neither do Kawthar and Salsabil[1] rival it!’ But if he [i.e. the King] letteth him [i.e. the messenger] go, and interfereth not with him, let him say, ‘To Thee be praise, O Lord of the worlds! Verily I am content with Thy good pleasure and what Thou hast predestined unto me in Thy way, even though I did desire that the earth might be dyed with my blood for Thy love. But what Thou willest is best for me: verily Thou knowest what is in my soul, while I know not what is in Thy soul; and Thou art the All-Knowing, the Informed.’

Badi’ travelled on foot all the way to Tihran. On arrival in the summer of 1869, he discovered that the King was on a camping expedition. He made his way to the area and sat on top of a rock far away, but opposite the royal pavilion. There he sat for three days and three nights in a state of fasting and prayer, awaiting the passing of the royal escort. What thoughts must have passed through his mind as he communed with his Lord, and what feelings of emotion must have filled his being as he sat so close to fulfilling the sacred mission with which he was entrusted, no one can say. One thing we can be sure of, that he possessed a supreme power and a supreme joy and was confident of victory.

On the fourth day, the Shah looking through his binoculars spotted a man dressed in a white garb sitting motionless and in a most respectful attitude on a rock opposite. He guessed that he had some demand to make for justice or was seeking help for his difficulties. He sent his men to find out who he was and what he wanted. Badi’ told them that he had a letter from a very important personage for the Shah and must hand it to him personally. The officers searched him and then brought him to the King. It seems very surprising that these officials, drunk with pride, ruthless and cruel in every way, did not grab the letter from him and walk away. The only explanation is that they must have felt the extraordinary power with which Bahá’u’lláh had invested His messenger. Otherwise, it was very unusual to allow an ordinary citizen to come and meet the sovereign face to face.

Only those well versed in the history of Persia in the nineteenth century can appreciate the immense dangers which faced an ordinary person like Badi’ wishing to meet a palace official, let alone the King. A despot such as Násiri’d-Dín Sháh ruled his country with a rod of iron. The government officials showed their authority through tyranny. They were accustomed to deal ruthlessly with anyone who dared to utter a word, or raise a finger against them or the established regime. The mere sighting of a soldier wearing the military uniform, or of a low-ranking government officer, was sufficient to frighten people away. As these men passed through the streets most people showed their respect for them; sometimes they had to bribe them and the timid often ran away.

To meet the King was far more frightful! When the forward section of the royal escort arrived in the street, the cry of the herald who announced to the public the approach of the King’s entourage would strike terror into the hearts of the citizens. It was a familiar term to all when he shouted: ‘Everyone die’, ‘Everyone go blind.’ The significance of these instructions was that as the King and his men passed by, everyone must stand still as a dead corpse and all eyes must be cast down as if blind.

Knowing the circumstances which prevailed at the time, we can appreciate the courage and steadfastness of Badi’ and the spirit of ascendancy and superhuman audacity which this youth of seventeen manifested as he stood assured and confident, straight as an arrow, face to face with the King. Calmly and courteously he handed him the Tablet and in a loud voice movingly called out the celebrated verse from the Qur’án: ‘O King, I have come unto thee from Sheba with a weighty message.'[1]

[1 Qur’án xxvii, 22. This verse differs slightly from what Badi’ uttered in the presence of the Shah. The verse refers to words which were addressed to Solomon by his messenger, Hoopoe, a mystical bird, when it brought for him tidings from Sheba.]

Badi’ was arrested. The Shah, who must have remembered the attempt on his life by two Bábís about two decades earlier, was taken aback by the courage and fearlessness of Bahá’u’lláh’s messenger. Sending the message to Mulla ‘Aliy-i-Kani, a well-known Muslim divine, to provide an answer, he ordered his men to get from Badi’, first through persuasion and promises, and then by torture if he refused to cooperate, the names of other Bahá’ís. The officer in charge was Kazim Khan-i-Qarachih-Daghi. When he failed to persuade Badi’ to reveal names of other Bahá’ís to him, he ordered that he be stripped of his clothes and branded several times with hot bars of iron. Badi’ endured these tortures for three successive days with a fortitude that astonished the officials who were watching him. They saw him utterly joyous while being tortured. It seemed to them that he was not feeling the pain; he often seemed to be laughing. This in spite of the fact that at times the smoke and smell created by the burning flesh was so intense that some officials could not stand it and had to leave the tent. The Shah, who was usually eager to see the photographs of prisoners, ordered a photograph to be taken of Badi’, especially when he had heard the stories of his fortitude under torture. This photograph shows the brazier of fire containing the rods of iron in the foreground and is the best testimony to the spirit of steadfastness and resignation, of calm and assurance which Badi”s face portrays.

As the three successive days of torture by branding yielded no information about the identity of other believers, the Chief Officer, Kazim Khan, threatened Badi’ with death unless he cooperated. Badi’ smiled at this threat and, as he did not reveal any name, his head was beaten to a pulp with a butt of a rifle. His body was thrown into a pit and earth and stones heaped upon it. This was in July 1869.