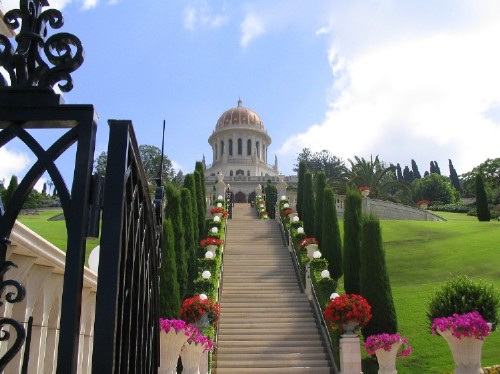 “Verily He is The King of Messengers”

“I am, I am, I am the promised One! I am the One whose name you have for a thousand years invoked, at whose mention you have risen, whose advent you have longed to witness, and the hour of whose Revelation you have prayed God to hasten. Verily I say, it is incumbent upon the peoples of both the East and the West to obey My word and to pledge allegiance to My person.”

The Bab was incarcerated in the prison of Chirhiq at the time of the start of the conflict at Tabarsi. He had sent his turban to Mulla Husayn and instructed him to wear it and fly the black standard at the vanguard of the believers on their march out of Khorasan to Fort Tabarsi.

The Bab was taken to Tabriz.

He was delivered into the hands of Sam Khan, who was ordered to execute him, if he persisted in his refusal to deny his Faith.

Sam Khan was, in the meantime, finding himself increasingly affected by the behaviour of his Captive and the treatment that had been meted out to Him. He was seized with great fear lest his action should bring upon him the wrath of God. “I profess the Christian Faith,” he explained to the Báb, “and entertain no ill will against you. If your Cause be the Cause of Truth, enable me to free myself from the obligation to shed your blood.” “Follow your instructions,” the Báb replied, “and if your intention be sincere, the Almighty is surely able to relieve you from your perplexity.”

Sam Khan ordered his men to drive a nail into the pillar that lay between the door of the room that Siyyid Husayn occupied and the entrance to the adjoining one, and to make fast two ropes to that nail, from which the Báb and His companion were to be separately suspended. Mirza Muhammad-‘Ali begged Sam Khan to be placed in such a manner that his own body would shield that of the Báb. He was eventually suspended in such a position that his head reposed on the breast of his Master. As soon as they were fastened, a regiment of soldiers ranged itself in three files, each of two hundred and fifty men, each of which was ordered to open fire in its turn until the whole detachment had discharged the volleys of its bullets. The smoke of the firing of the seven hundred and fifty rifles was such as to turn the light of the noonday sun into darkness. There had crowded onto the roof of the barracks, as well as the tops of the adjoining houses, about ten thousand people, all of whom were witnesses to that sad and moving scene.
“The Báb remained silent. His pale handsome face framed by a black beard and small mustache, his appearance and his refined manners, his white and delicate hands, his simple but very neat garments — everything about him awakened sympathy and compassion.” (Journal Asiatique, 1866. tome 7, p. 378.)]

As soon as the cloud of smoke had cleared away, an astounded multitude were looking upon a scene which their eyes could scarcely believe. There, standing before them alive and unhurt, was the companion of the Báb, whilst He Himself had vanished uninjured from their sight. Though the cords with which they were suspended had been rent in pieces by the bullets, yet their bodies had miraculously escaped the volleys. Even the tunic which Mirza Muhammad-‘Ali was wearing had, despite the thickness of the smoke, remained unsullied. “The Siyyid-i-Báb has gone from our sight!” rang out the voices of the bewildered multitude. They set out in a frenzied search for Him, and found Him, eventually, seated in the same room which He had occupied the night before, engaged in completing His interrupted conversation, with Siyyid Husayn. An expression of unruffled calm was upon His face. His body had emerged unscathed from the shower of bullets which the regiment had directed against Him. “I have finished My conversation with Siyyid Husayn,” the Báb told the farrash-bashi. “Now you may proceed to fulfil your intention.” The man was too much shaken to resume what he had already attempted. Refusing to accomplish his duty, he, that same moment, left that scene and resigned his post. He related all that he had seen to his neighbour, Mirza Siyyid Muhsin, one of the notables of Tabriz, who, as soon as he heard the story, was converted to the Faith.

“O wayward generation!” were the last words of the Báb to the gazing multitude, as the regiment prepared to fire its volley, “Had you believed in Me every one of you would have followed the example of this youth, who stood in rank above most of you, and would have willingly sacrificed himself in My path. The day will come when you will have recognized Me; that day I shall have ceased to be with you.”

At this volley the bullets produced such an effect that the breasts [of the victims] were riddled, and their limbs were completely dissected, except their faces, which were but little marred.

The very moment the shots were fired a gale of exceptional violence arose and swept over the city. From noon till night a whirlwind of dust obscured the light of the sun, and blinded the eyes of the people. In Shiraz an “earthquake,” foreshadowed in no less weighty a Book than the Revelation of St. John, occurred in 1268 A.H. which threw the whole city into turmoil and wrought havoc amongst its people, a havoc that was greatly aggravated by  the outbreak of cholera, by famine and other afflictions. In that same year no less than two hundred and fifty of the firing squad, that had replaced Sam Khan’s regiment, met their death, together with their officers, in a terrible earthquake, while the remaining five hundred suffered, three years later, as a punishment for their mutiny, the same fate as that which their hands had inflicted upon the Báb. To insure that none of them had survived, they were riddled with a second volley, after which their bodies, pierced with spears and lances, were exposed to the gaze of the people of Tabriz. The prime instigator of the Báb’s death, the implacable Amir-Nizam, together with his brother, his chief accomplice, met their death within two years of that savage act.

The Castle of Maku Azerbayjan, Iran where The Bab was imprisoned.